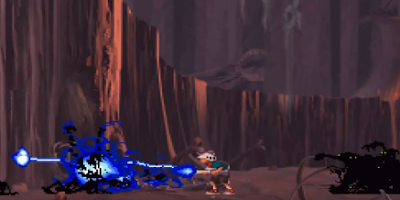 Conditions: Finish the game on a medium difficulty ✓

I was almost at the end of the game when  my disk stopped working. Fortunately I found  a replacement and I was able to finish the game.

The game is about Andy, a young boy who doesn't pay any attention in class yet somehow he's able to construct a functional flying machine and lightning gun out of scrap metal. He suffers from nyctophobia (fear of the dark) and has a loyal dog named Whiskey. Sudden eclipse happens while they chill in a park and Whiskey gets kidnapped by the darkness...somehow (it happens off camera). Determined to rescue his friend, Andy runs home to his treehouse full of fantastic inventions, grabs a Tesla gun and takes off in his flying machine. How does he even know where to look for Whiskey? Up in the sky he collides with a flying darkling and crashes into a cliff. By the look of it he must be from Arizona. He gets attacked by shadowy creatures and the game throws tons of them at you from the very beginning which is a very odd since the first 5 minutes are one of the hardest in a whole game. Instead of  giving players some time to familiarize themselves with controls and whatnot, they throw at you an angry mob of shadow creatures that will literally tear you apart. I can't understand that decision. After a while Andy meets Jar Jar-like creatures called Amigos and they are just as annoying. The twist ending will answer all the questions you could possibly have about this weird world and it will sort out all the things that didn't make sense. I see how some people could hate the ending but it didn't bother me. But I'm surprised they put such an effort to make this game feel cinematic but they didn't write a very good plot. It's kinda terrible actually. What is also surprising is they hired a film and TV composer Bruce Broughton (Homeward Bound!) and a symphonic orchestra but they only used the music during cut scenes. There is no music during the gameplay for some reason.

The game has great pacing and keeps changing things up so it's always interesting. Starts with some shooting sections, then you lose your gun and you have to run away from the enemies using your platforming skills. Andy gets a new power after coming in contact with a glowing green rock. Now he can shoot things as well as make seeds grow into trees. The later ability is used for puzzles. There are a lot of environmental puzzles where you have to move objects to a specific place and then activate them. They are not hard to figure out. Right in the beginning the game shows some interesting mechanics. Shadows can attack you and the only way to get rid of them is to destroy objects that are casting them. Great idea but sadly the game doesn't use it often and it feels like a wasted potential. The game has beautiful backgrounds and amazing animation. It can be frustrating at times, the last level made me scream at a TV for one hour straight but I enjoy the challenge (unless it's totally unfair like MK2). Heart of Darkness is officially the first PS1 game I've ever beaten.