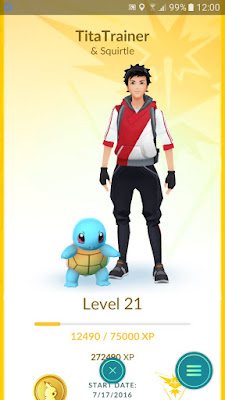 I set pretty easy and simple conditions for the game to be considered "finished". I didn't want to choose something like "complete the Pokédex" because it's not entirely clear which Pokémon are available right now and they are still adding new ones.  I got to level 21, defeated, claimed and defended gyms and caught/evolved 80 unique Pokémon. Basically I experienced pretty much everything that the game has to offer at this moment and unfortunately it's not much. The game is fun to play for the first couple of days but it gets old very fast due to it's repetitive nature. Catching the same Pokémon over and over again isn't fun and once you take over some gyms, there's nothing else to do. No wonder so many people stopped playing.

The idea behind the game is genius. You walk around in a real world and search for Pokémon which will appear around you randomly. Once you bump into one, you can actually see it through the phone camera and try to capture it. Along a way you can get items from Pokéstops and battle in gyms which are at fixed locations, usually landmarks. It's a game that encourages you to go outside and explore the environment. There weren't that many Pokémon in my area so I took trips to nature in order to hunt Pokémon but quickly I realized there were more Pokémon living in the urban areas than in forests. I caught more Pokémon in 5 minutes on a town square than in 2 hours hiking through the woods. Shouldn't it be the other way around? The GPS tracking doesn't work properly, I could leave my phone lying on the table and my character would still run around the screen.

When trying to catch a Pokémon, you don't have to weaken them like in every other Pokémon game.  All you have to do is throw a Pokéball at them (with a little finesse) and that's it. The creature animations are very well done as they dodge and bounce back Pokéballs you throw at them. In this game Pokémon aren't getting stronger through fighting, they get stronger by eating candies. Whenever you catch a Pokémon you get candy which you can use to level up the same type of Pokémon. Not only does this go against the core concept of Pokémon, it also makes leveling rare Pokémon almost impossible. Your starter was literally useless before they introduced a new feature in one of the later patches in which you can choose one of your Pokémon to walk around with you and get stronger by doing so. The problem is, it will still level up at the slower rate than the other Pokémon which are common in your area. You can only walk one Pokémon at a time so forget leveling both Squirtle and Rhyhorn for example. The battle system has no depth to it. You just attack by tapping the screen. You may try to dodge some attacks by swiping the screen but it feels pretty random. There's no depth to it. All they had to do is copy the old Game Boy turn based system and it would work perfectly. Did they think the casual playerbase is too stupid to understate the game that was meant for children? When Pokémon GO came out and everyone was playing, it was a great social experience. People were hunting together, taking over gyms etc but it all happened outside of the game. The game itself does not have any social features. You can't see other trainers on the map, you can't battle other people or trade with them. There's not even a friends list.

Pokémon GO is the biggest waste of potential in video game history.The game became a true phenomenon when it came out, everyone was playing it. If the fighting and leveling systems were done right, if they had essential features in place, if they expanded the development team and rolled out updates faster then many people would stick with it. There is still hope for the future, they are still working on new features and trading was announced but considering the rate they were pushing out updates, I don't have much faith in Niantic. If only they'd outsource it to some more competent developer.