Despite being one of the fan favorites, Scorpion is ranked by mksecrets.net as the worst Mortal Kombat 1 character because of his long recovery time. I didn't have any problems beating the game with him tho, I think I did it on the second or third try. And with Scorpion's victory, I finally finished Mortal Kombat 1! 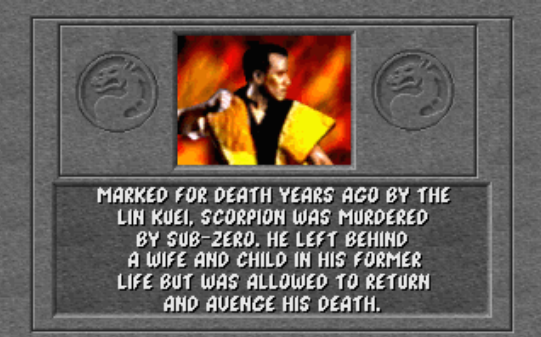 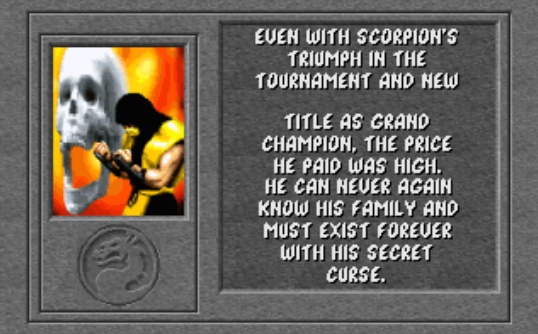 Posted by Venser at 1:35 AM No comments:


What happens when you mix yellow with blue? You get green. You get Reptile. The green ninja is a secret character who can use special moves of both Scorpion and Sub-Zero. He has also faster walk speed, which makes him really annoying. I was disappointed to find out he is not a playable character. I sort of expected him to appear in the character selection screen instead of the dragon logo after you beat him but that's not the case. The green ninja will sometimes randomly appear during the game before the match starts and leave some cryptic messages. These are hints on how to find him.

Sometimes during the fight on the pit stage you can see siluethes flying in the sky
("Look to La Luna"). If the siluethes are present, you could get a chance to fight Reptile. The siluethes appear every 6 games or so on a PC but on the actual arcade it's much more rare. To fight Reptile, you have to win both rounds with flawless victory, without using the block button and then perform a fatality. 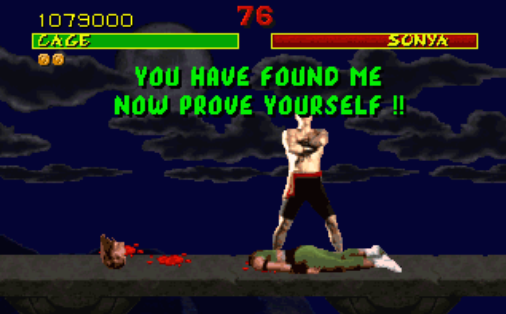 The secret character Reptile is just a meshup of Sub-Zero and Scorpion in the first game but he will become a playable character in the sequel with his own original set of moves.

Posted by Venser at 1:17 AM No comments: