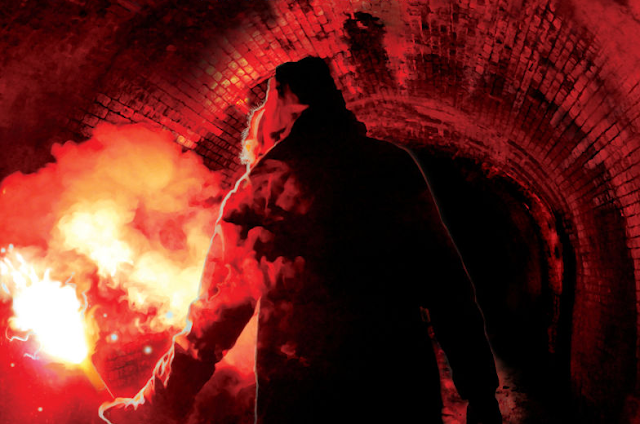 Penumbra: Overture is a first person horror adventure from Frictional Games, the studio behind Amnesia and Soma. It was based of Penumbra, a short tech demo Frictional made to demonstrate the capabilities of their HPL engine, named after H.P. Lovecraft, whose influence is present throughout the game. The reception was very positive so they decided to turn it into a full length game and eventually into a trilogy.

I started playing Penumbra: Overture on Halloween 2015 and got about halfway into it when I got stuck on the generator puzzle. I thought I'll figure it out the next day but for some reason I haven't fired up the game again. Since 2 years have passed I decided to start fresh with a new playthrough. 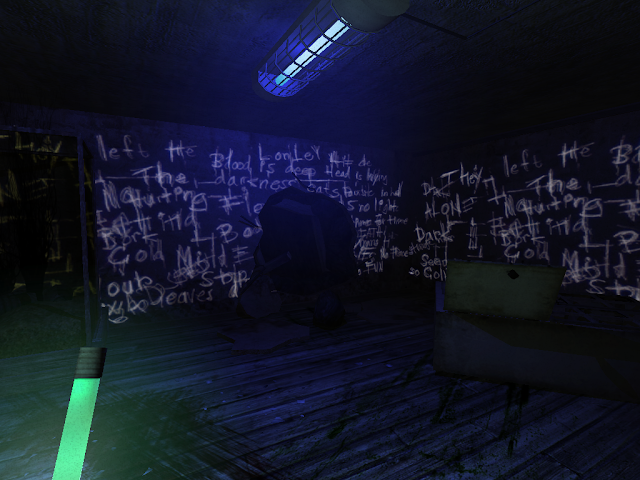 The basic setup is explained in the intro. You play as Phillip, a thirty year old physics teacher whose mother had passed away. A few days after her funeral he receives a letter from his father whom he never met and who has been declared dead for almost 30 years. Inside: a plea for forgiveness, a key to a deposit box and instructions to burn its content without reading. Curiosity gets the better of him and despite the documents being indecipherable, he finds a note pointing out a location in uninhabited Northern Greenland. A year later he books a flight and takes a charter boat there. That's where the game begins. After looking around the area alone on foot (what a great idea), Phillip gets lost and looks for a shelter from the cold. He finds a hatch leading into an abandoned mine but ends up trapped inside after the entrance collapses. Soon it becomes apparent the mine isn't as empty as it seemed...

The story is told through exploration and reading notes and diaries left from previous occupants. Only in the second half you find somebody still alive who will guide you via radio messages. The diaries are well written and I would highlight a particular one from a guy who survived in the mine for over 300 days solely by eating spiders. It's a short creepy story on its own. On a few occasion the game takes away control of the camera from you in order to create a cinematic scene that doesn't add anything to the experience except it ruins the immersion. 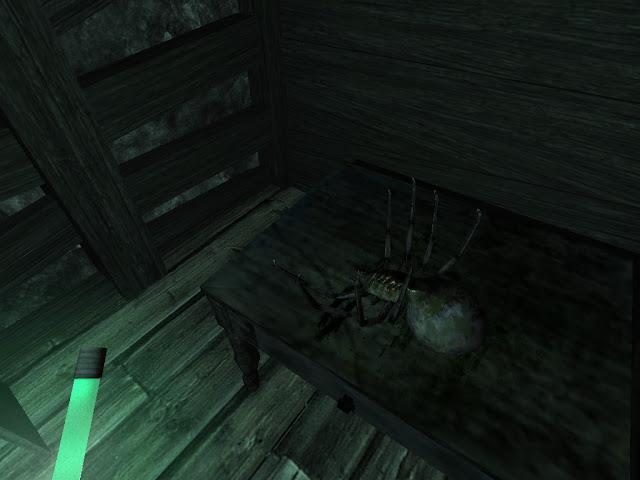 What really made this game unique was the use of Newton Game Dynamics physics engine which allowed players to interact with objects in a way that mimics real life motions. In order to open a drawer you grab it, then move a mouse toward yourself as if you are pulling. To hit something, you perform a swinging motion across a mouse pad. You can partially open doors and peak behind them. You can stack objects and use them to climb or barricade the doors to slow down enemies. The result is very natural interaction with objects but incredibly clumsy combat due to camera locking. It is so bad that it's better not to engage in it at all. And maybe that's the point. Phillip can't even look at the monsters. If you stare at them for too long he starts to lose his sanity. So sneaking around is pretty much your your only true option. I beat the whole game without fighting once and the only enemy I did kill was by luring it into a trap. The stealth is a bit too easy. When you crouch in the shadows or behind objects, your vision gets a blueish tint indicating that you are hidden. If you are "hidden", the enemy AI won't notice you even if it literally stands right next to you. Positional audio doesn't always work as intended and can be quite deceiving. Sometimes you'll hear enemy growl as if they are right next to your ear but in reality they are behind a wall 10 meters away.

All puzzles in the game are logical and generally well done. Some of the things to do include mixing chemicals, combining items in inventory to create bombs, fixing and operating complex machinery using instruction manuals, obtaining a keypad combination through a morse code recording etc. There are quite a bit of physics based puzzles too. Solving most of them will make you feel smart which goes in contrast against a single bad puzzle in the game where a note literally spells you the answer in all caps.

After all said, it is a horror game so everything comes down to a simple question: is it scary?
Well...no. But they did some horror aspects right. First of all they created horror through atmosphere. There are no jump scares in the game. Entrance collapses behind you and there's no going back. The feeling of dread and finality increases as you descent deeper and deeper into the mine. There's this particular moment in the game where you cross over a deep pit on wooden planks after encountering a certain creature. You look into the abyss bellow and think about the implications of what you just witnessed and wonder what kind of colossal creatures may lurk deep down bellow. That is Lovecraftian horror at its finest. You get a feeling that developers are really taking their time and holding back the scares but after encountering the same creatures over and over again, you develop a sense of security, which is never a good thing in a horror game. There are only few types of monsters and none of them are scary. Zombie dogs and large spiders? Very original, haven't seen those before..
Although a bit formulaic and cliche, the story is well told and interesting enough to keep you playing. The finale sets up the sequel, which is fine since they envisioned Penumbra as a trilogy from the very beginning.

Posted by Venser at 7:02 PM No comments: 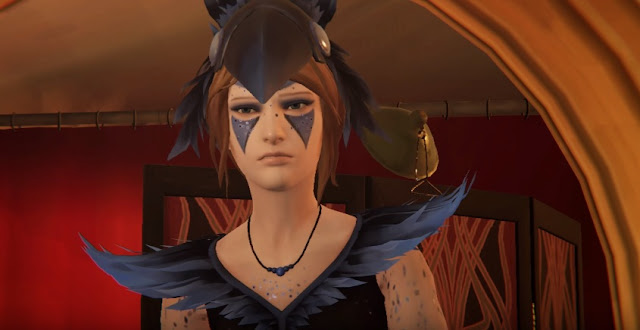 I was a little bit let down by the first episode but I find myself liking the second one more. I'm not sure whether it's got anything to do with the quality or I simply got used to changes and got more attached to a new story. I was worried the ending of the first episode implied that Rachel may have some sort of supernatural powers and I was glad to find it wasn't the case.

Episode 3 starts in the principle office where you're given a choice of covering for your friend with a risk of getting expelled from school. I already knew how it's going to play out from playing the first season but I still felt bad for Chloe and her mother and it reminded me when I was in a similar situation in high school. What's worse, David and Joyce decided it's time for David to move in and I could feel the weight behind the decision and what effect it had on Chloe. She refused to come home as long as he's there and took off to a familiar place- the junkyard. Looking back at season one, I can now see why this place was so special to her. But besides meaningful moments, the junkyard is also a place where busy work like searching for bottles and other forms of padding often occur. This time Chloe was looking for spare parts in order to fix a truck and it felt like stalling again. I didn't mind it too much because it was nice to see Chloe doing something productive for a change and they did give you a couple of options to personalize the truck. Later on she helps Frank with some business at school. In order to get inside the dorm she has to solve a mandatory puzzle that is both terribly designed and completely unnecessary. Deck Nine doesn't know how to design interesting problems to solve but they excel at creating scenarios such as the D&D tabletop session in which you could participate in the last episode or performing in a school play in this one. You have to read and memorize the lines and then play it out on stage. I noticed that some side characters like Nathan can either nail their part or choke on stage depending on your previous interactions with them, which is a nice little detail you won't really notice without replaying the game. The school play stands as the highlight of the episode for me. After the play the mood shifts to ecstatic as the girls discuss their future and plot an escape from Arcadia Bay. For a moment it felt so hopeful and I was rooting for them despite of knowing their ultimate fate.


Having a dinner with Rachel's parents at their house was appropriately awkward. Unfortunately at that point the game starts dragging again and makes you do such busywork as setting up a table or asking Rachel's dad what he wants to drink. It's just an excuse for you to snoop around their living room. That's where I really started noticing how annoying Chloe's inner monologue can be. Does she really have to comment on every single task she performs, like picking up a plate? Her comments are rarely clever or insightful. While playing as Max it felt like an awkward part of her personality but I don't think it works for Chloe. The tension at the dinner table was real but that's also where bad writing and voice acting started to really show. The flow of the conversation didn't feel natural and it was obvious the actors recorded their lines separately. The dinner scene showcased the level of writing and acting that would never fly on a TV show but for some reason is acceptable in a video game. With that said, the ending did deliver very much needed mystery and left me longing for the next episode.

Posted by Venser at 4:46 PM No comments: