Game of Thrones Episode 5: A Nest of Vipers Finished 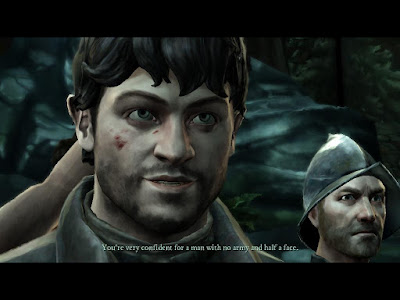 Unfortunately I got the ending spoiled and I knew from the start that I'll be able to save either Roderick or Asher. Before I even started the episode I already decided I'll let Roderick live. I like both of them but he is more suited to be a lord and his whole recovery would make a nice story arc. However when I finally reached the scene and saw the context, I had to leave Roderick behind since it made more sense in a way I played his character. He would choose to stay. I was looking forward to see Asher and Roderick rule and fight side by side so it was pretty disappointing the way it ended. The whole situation was bullshit anyway, archers would kill both of them just like they shot down every soldier that tried to get in under the gate. So even one of them making it out alive requires suspension of disbelief.
I feel stupid for carefully observing character actions and trying to figure out  which character was a traitor. They did exactly what I was afraid they're going to do. If you choose Royland for a sentinel, Duncan would betray you and vice versa. In my case the traitor was Royland and his reasoning was he tried to save the house and thought Roderick was too weak. My Roderick might have been physically weak but he never shown any type of weakness, didn't submit to anybody and always stood up to Gryff. Even Ramsay said something like "so I heard you're the man who cannot be broken". Even his physical recovery was going well so it makes no sense he would view him as weak. And how would betrayal help the house anyway?
I liked the part with the fighting pit, headbutting "The Beast" was fun (didn't enjoy the fight tho, don't like QTEs) and talk with Tyrion was slightly amusing. Gared's part was the least interesting.

All in all it's one of the weakest and possibly shortest episodes.