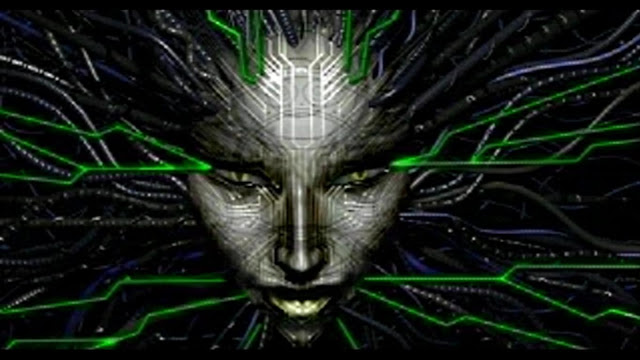 Conditions: Beat the game on impossible difficulty ✓
Play it only in the dark with the headphones on ✓

I played the GOG version with the universal update patch. I didn't use SS2Tool, mods or HD textures because I want to experience games in their original form during the first playthrough. I actually played Shock 2 before but I didn't get to the end. There is a lot of backtracking in the game but I didn't find it annoying because the ship Von Braun, just like the Citadel station from the first game, feels like a real place and it's a character on it's own. Out of the 3 character classes I chose NAVI (tech specialist) and decided to focus on hacking and standard weapons skills. This game gave me nightmares as a kid and I was happy to revisit it but nothing could prepare me for the true horror - the protagonist's face. It is so terribly misshapen it doesn't even look human. I'm sure this was really bad even at a time it came out. Just look at it!


Never mind that, I just woke up from hypersleep and the entire sector is depressurizing, time to run. As Polito's voice is leading me through corridors and I listen to audio logs, I'm thinking the voice acting is really good. In the room with upgrade units I witness a ghostly apparition reenacting an event from the past. Apparently cybernetic implants enhance your perception and they can pick up ghostly phenomena. I always thought the ghost stuff was pretty stupid. The doors to the main hall open and I can hear distant mumbling of a mutant hybrid - "We seek, WEE SEEK!"  Nope, I'm not leaving this room. I back off whenever the voices get closer. I swear I spent at least 5 minutes just leaning behind a wall, afraid to step forward.


All the horror disappeared in a second after I  killed a first hybrid. The same thing happened when I played Aliens versus Predator. At first I was nervously looking around in fear and I nearly shit my pants at the cliché broken steam pipe jump scare but after encountering an actual xenomorph, all fear was gone. System Shock 2 really creeped me out as a kid but both me and the game aged and I don't find it scary anymore. Doesn't matter, the story is still interesting and the game is hard. At this point I would go down from a single pipe swing of a hybrid. The game is really good at making you feel vulnerable and there is serious lack of ammo so you have to conserve it whenever it's possible. Wrench will be your best friend, get used to it. Scavenging and item management is really important so it's safe to say this game is a first person survival horror. Even the seemingly useless items like plants, cups and magazines can be recycled and converted into money. The gunplay feels alrigh, a lot better than in Deus Ex for example. The only problem is weapons are apparently made out of paper and they break after a couple of shots.

The story is pretty good and well told through audio logs. Unfortunately I got the big twist spoiled and I knew that Polito will turn out to be SHODAN but I didn't know the details so it was still a surprise to find we will be allies. The story suffers from some sci-fi stereotypes and they basically ripped off Alien. I mean they straight up called them "xenomorphs". Then again it wasn't totally unexpected since the later levels of the first game had very Giger-ish imagery.


Also some enemies feel a bit out of place. Like why the hell are there cybernetic ninja assassins on a FTL space ship? Doesn't matter, they are one of the more interesting enemies to fight. They throw energy shurikens at you from long range and run away when you get close to them. They are super fast so it was a nightmare trying to catch one of them with a wrench after I ran out of bullets. They remind me of the Black Ops assassins from Half-Life. After I crashed into bio mass in the Rickenbacker and started to descent into corridors made out of flesh, I started losing all hope for a happy ending. I thought the game could only end in two ways. Either SHODAN will transfer herself into my increasingly more cybernetic body and I will become her avatar, or more likely, I'll end up sacrificing myself  in order to blow up the bio mass. None of that happened. After SHODAN gets the power to alter reality, it starts recreating the Citadel station from memory and the final level of the game is actually the first level of System Shock 1. I felt right at home, having played the first game a few years ago. Visiting Rapture in Bioshock Infinite was awesome but System Shock 2 did it first!

The final boss fight was very disappointing, even compared to the anti-climatic boss fight from the first game. The ending cut scene was even worse.  I get what they were going for. Of course player wouldn't do what SHODAN wants and the "nah" after the epic long James Bond villain-like talk was similar to Indiana Jones simply shooting the swordsman who spent last 10 seconds showing off his skill. However I don't think the ending worked because it completely shifted the tone of the game that tried to be serious up to that point and the incredibly poor delivery of that single word didn't help either.


I already have an urge to replay the game. On my first playthrough I barely touched Psi skills and I wasn't able to use more powerful weapons like machine gun, grenade launcher or any heavy or exotic weapons. This time I'm going to use some mods and HD textures. The co-op seems really cool so hopefully I can get it to work.