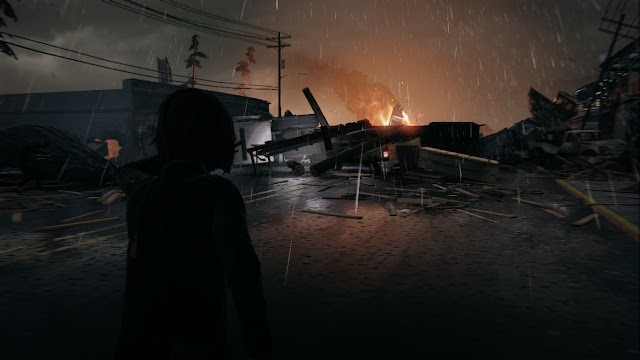 WARNING: SPOILERS! Don't read if you haven't finished the game yet.

The final episode got pretty polarized reactions and a lot of people complained about the ending. It wasn't just the ending that bothered me personally, it was the whole episode. But let's start from the beginning. Episode four ended on a huge twist that revealed Mark Jefferson is a murderer. I hoped they would provide a good explanation behind his motivation and develop his character in an interesting way but no, he's just evil. He explained his motivation in a overly long exposition speech that just bored me to death because I didn't believe a single word that came out of his mouth. Way to flush a good character down a toilet. The whole  episode was evidently rushed. That is unfortunate because even if they delayed it for a whole another month, they would still release episodes at a faster pace than Telltale. The Zeitgeist gallery level is clearly unfinished. Normally a conversation with any character would trigger a cut scene but in this part you talk to various critics and they just speak their dialogue without even looking at you. There's a a guy who talks about Jefferson, voiced by the same actor who plays Jefferson and it's painfully obvious. Oh and somehow all critics know Max Caulfield. She is just one of the many, many contestants but everyone recognizes her face and remembers her name.


This episode felt a lot less interactive compared to the previous ones and thus less engaging. But I think that might be the point. Max is no longer in control. In one part she is drugged and tied up to a chair and in another she is trapped inside a nightmare. There's a lot of jumping between timelines  and it can get quite confusing, so much that even Max can't quite understand it and finds herself trapped once again because of it. After playing through this episode and reflecting on it, I think I was able to fully grasp the theory of time travel in this game and it doesn't make much sense. The way Max loses memory of what she has just done after jumping into a photograph gives me a bit of a creepy body snatcher vibe.


The thing that bothered me the most in this episode was Warren's reaction, or lack of, when Max told him she can rewind time. He just accepted it with a straight face. He didn't question it for a second, didn't even ask how she can travel through time (as far as he knows, she might be using a time machine) but somehow he knew right away that she caused a tornado and started to lecture her about chaos theory. That single scene made me suspend my disbelief thousand times harder than any of the sci-fi time travel stuff.


Then there was this trippy nightmare sequence that blew my mind since it came out of nowhere and got progressively weirder. The looping dorm hall puzzle in which you have to connect a character with a corresponding room was pretty cool and it was obviously inspired by Kojima's P.T. However the best puzzle in the game was ruined for me when Max straight up told me the solution after a short time. I haven't even started solving it yet, I was just taking screenshots and stuff, I would totally solve it on my own but I guess Dontnod took an advice from stupid game reviewers. Let me quote a line from a GameSpot review of episode 4:

"When the puzzle began, I had no idea what I was looking for, and it was a long time before Max's voice-over offered any hints as to what I should be searching." - Alexa Ray Corriea, GS

The whole nightmare sequence goes on for way too long and ads very little to the story. The long walk at the end of it reminds you of all the things you went through with Chloe, as you witness both happy and sad moments from previous episodes. The purpose of this recap is to put bigger emotional weight on your final decision (sacrifice Chloe or sacrifice Arcadia Bay). It's basically game's equivalent of a movie montage. Despite that, the ending didn't hit my emotional cord as hard as it should. The scene on the rooftop with Kate in episode 2, the ending of the episode 3 and the whole goddamn episode 4 had a huge emotional impact on me. Even the earlier scenes in this episode, like David's reaction to Chloe's death or Nathan's phone message had a stronger effect because at the time things still felt somewhat grounded. But after jumping between timelines so many times, seeing Arcadia Bay destroyed and people killed and then going through that insanely long nightmare sequence, things just didn't feel real anymore. Not only that but I sort of accepted Chloe's death already after telling David about it. The ending was fairly predictable (many people already called it after playing through the first 2 episodes) and it left a lot of questions unanswered. Most important of all, how did Max get her powers? I've seen a lot of people complain about why she even got the power if she wasn't supposed to use it and I thought about it and here's my personal interpretation:

It seems to me like Max got her powers so she can spend a few days with her best friend and have a chance to say goodbye. Now imagine what would happen if she didn't get the rewind power. Max left Chloe behind and went to Seattle when she needed her the most and never called or wrote her. She returned after a few years and avoided her for a whole month only to see her get shot in front of her eyes without a having a chance to say one word to her. Imagine how shitty Max would feel if things have played out this way. The guilt would destroy her. Through her powers she was able to reconcile with Chloe and spend some quality time with her. It didn't happen in this timeline but it was still real to Max. In Blade Runner Roy said "All those moments will be lost in time...like tears in rain" but their moments won't be lost as long as Max remembers them.

Episode 5 was definitely the weakest. I expected much better finale but it didn't ruin the game for me. There are still good moments in it and some characters got great closure, mainly David and Chloe.

My choices and collectible photos