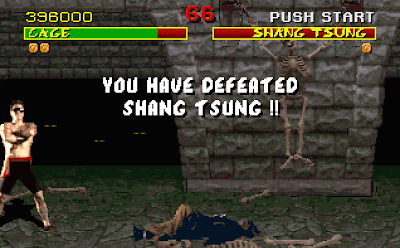 YES! Finally! It took longer time than I anticipated and a lot of frustration but I finally beat the game with Johnny Cage. Only 6 more characters left to go...YAY! Ugh...I already kinda regret choosing this game to be the fist one to beat. It's pretty damn hard. I play up to 5 matches per day with pauses between them because I start to rage and lose all focus after failing a few times in a row. Getting through endurance stages where you have to fight 2 opponents in a row with the same health bar is the hardest part of the game. I have no trouble with the end bosses. I just wish I could start with endurance matches right away because beating all the other fighters before feels like a time wasting chore with no risk involved.


Kano is the next character I'm gonna use and I think this time it'll go faster. On my first playthrough with him I got to the final endurance stage without even knowing how to do his special spinning attack.
Posted by Venser at 1:03 AM