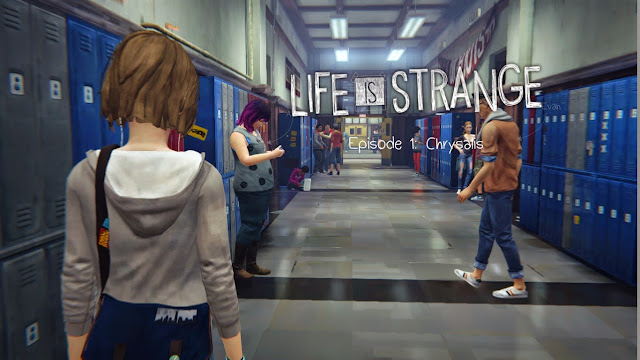 Haven't updated this blog in a while. I finished this episode way back in February but I was very busy and couldn't find the time to write about it.

Life Is Strange is an episodic high school mystery drama with a touch of supernatural. The story follows Max Caulfield, an 18 year old girl who returns to her home town Arcadia Bay after 5 years in order to study photography at an elite private school Blackwell Academy.  She plans to reunite with her childhood friend Chloe with whom she lost contact. Things become weird when she whitenesses a murder in girl's bathroom, which somehow triggers her ability to rewind time. This is just the beginning and soon you will be solving mystery of a missing girl, encountering spirit animals and getting tornado visions while trying to balance your daily life at school. The story isn't afraid to tackle such topics as bullying, drugs, rape and teen pregnancy.

The game looks beautiful and feels very cinematic. Hand painted textures combined with a great use of lightning give it a very distinctive visual style. The only thing I could complain about is Max's hair- it can look very solid, almost like plastic...or chocolate. The character's eyes can be quite weird looking in some scenes as well. I've played the game on medium setting so keep that in mind while looking at screenshots.

Some examples of great lightning that sets the atmosphere


This action will have consequences

The games's strongest selling points are the choice/consequence system and the time rewind mechanic, which often go hand in hand. You can make a decision, observe short term consequences and then rewind back and try something different until you settle for a choice that appeals to you the most. Even so, it is still hard to make a decision because most of the time there is no clear right or wrong answer and you don't know which decision will bite you in the ass later down the road. The choices are nicely balanced in that way. What I didn't like is that the game straight up tells you "This action will have consequence". When I play I want to be under the illusion that all my actions could have consequences. These messages, which cannot be turned off, break the immersion. The time rewind mechanic is fairly well implemented into gameplay and the rewind effect looks visually impressive. There are some limitations (checkpoints) on how far back you can rewind but that makes sense in the context of the game world since it's implied that Max gets hurt by using her power too much. I wish there was a hidden rewind meter that would take away your health and prevent you from abusing time travel too much. The power itself and the way it works is a bit inconsistent. The first time Max uses her power and rewinds time in the bathroom, she finds herself sitting in class a few minutes earlier. But whenever you rewind the time during the game, she remains at the exact same place while everything around her changes. This basically gives her a power of teleportation but non of the characters seem to react when suddenly Max appears beside them even tho she was nowhere near a second ago. I guess we are just supposed to ignore it because it works well for the puzzles...

The puzzles are badly constructed and unrealistic. For example, there's a part in which you have to get tools but they are on top of a washing machine, just out of your reach. The first thing that came to my mind is to take a crowbar that was lying on the table right next to it and knock it of. But the game won't let you to do that. The correct and only way to solve the puzzle is to turn on the washing machine, which then starts to shake and the tools slide of. Max won't catch them as the fall behind the table so she must rewind again and put a cardboard under so she can pull it out after the tools land on it. Incredibly complicated process for such a simple task. It feels very "gamey". How did she even know the washing machine would vibrate so much? I wish there would be multiple solutions to solve problems in the game. I think there's a lot of wasted potential there. Multiple solutions worked so well in Fahrenheit (Indigo Prophecy).

When it comes to interactivity, the game gives you enough things to examine and read through, actions to perform and characters you can talk to but I wish they went a step further. For example, you can ask a girl to remote control her drone. When you do, you get to see the point of view of the drone flying around a schoolyard but wouldn't it be cool if you could actually fly the drone yourself? Max is a passionate photographer who often takes photos with her Polaroid camera. I really wish photography was implemented into the gameplay in a way players could take pictures manually. During the game Max receives text messages on her phone, to which she automatically responds. I think it would be great if we could sometimes choose an answer,  just like we can during the dialogue. Max's diary is a really cool little feature that can be accessed at any time. It changes automatically based on your actions and you can read through it if you need a recap or just want to delve deeper into her mind.


Characters, acting and writing. Are you cereal?

I like character designs in the game but Max doesn't look her age. She is supposed to be 18 yet she looks 14-15 at most. Her childhood friend Chloe isn't very likable. Actually most of the characters act like dicks towards you without any reason and only after using your power you can befriend them by telling them exactly what they want to hear. But do I really want to hang out with these guys under those circumstances? Only Dana and Warren were nice to me. Kate is supposed to be my friend but during the first interaction she just tells me she wants to be left alone. Not the greatest first impression. The one character I really love to hate is Victoria Chase. She is a bully with an entourage of mean girls that seem to follow her every command and laugh at her jokes. A lot of characters may seem like a stereotypes but Dontnod has addressed that by saying they are using established character types and evolving them outside of the boundaries of those clichés by putting them on completely unexpected paths. So I'm looking forward to see how will they develop them during the rest of the season. The voice acting is mostly good but a lot of side characters are voiced by the same actors and it is noticeable. The actor who voiced Max's friend Warren is the most annoying and he got to play a few other characters and you can tell right away it's him. The lip sync is terrible but it didn't really bother me throughout the game, until during the final scene where it is especially noticeable and takes a lot of impact from the ending because the voices seem disconnected from the scene. A lot of people complained about the writing and the overuse of the word "hella". Hella is apparently a NorthCal thing so it's actually accurate considering the setting of the game but the dialogue can be quite cringey at times.


Some stats: photo album and choices (Spoiler warning!) Collected all the photos in the first episode.


What really stands out is a great soundtrack composed by Jonathan Morali of the band Syd Matters. It features 2 of their songs among other licensed tracks (PJ Harvey!) and sets the mood perfectly. Life Is Strange may seem very familiar, even cliché at times but only compared to movies and TV series. Compared to other games it's very unique and there's nothing quite like it.